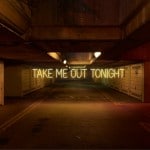 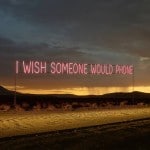 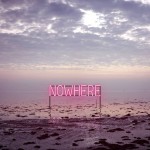 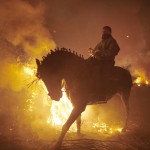 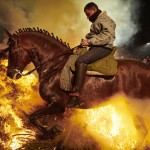 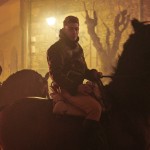 Young British photographer, Samuel Hicks, has two new projects that we are presenting here. The first, is an on-going project, Neon Stories. Each meticulously crafted image takes its inspiration from song lyrics that have significant meaning to the photographer. The images have been taken in different locations across the UK and US with lyrics from artists as diverse as Skepta and David Bowie.

Hicks’s other project, ‘Las Luminarias’ came from a recent trip to Spain earlier this year. Las Luminarias is a 400 year old festival held in San Bartolome de Pinares, about 100 KM west of Madrid. Its traditions combine the pre-Christian magical rituals of local peasants with Catholic beliefs, where they purify their horses for the year ahead by riding them through fires. Las Luminarias is held on the 16th January, the night before St. Anthony’s Day.

Samuel Hicks has forged a successful career in commercial and editorial photography, travelling around the world and working for clients such as O2, Land Rover, Lucozade, The Times, The Independent and Wallpaper Magazine. In the last few years his personal projects have incorporated working on location i